Take a quick trip with us to rediscover the classic rum drink that’s been around since 1898 and carries a legacy that is still cherished today. We're talking about the daiquiri. Many of us have enjoyed this refreshing cocktail while on vacation, or at our favorite cocktail bar, but few of us know the story behind the Papa Doble...better known as the Hemingway Daiquiri.

The great American author, Ernest Hemingway, was known to enjoy a cocktail or two. He became synonymous with the daiquiri after a chance meeting between him and a famous Cuban bartender helped shape the history of this drink.

A Brief History of the Daiquiri & Different Variations

Jennings Cox was a U.S. mining engineer based in Cuba during the Spanish-American War. His goal? Protect his workers from the local yellow fever outbreak. Back then, lime and alcohol were both believed to protect against the disease. So in the small mining village of Daiquiri, Cuba, in an effort to protect his colleagues, Mr. Cox took rum, lime juice, sugar, and cracked ice and concocted the earliest known version of the daiquiri.

During the early 1930s, Constante Ribalaigua, a legendary bartender at the El Floridita bar in Havana, was crafting what would later be known as the Hemingway Daiquiri. Constante was inspired by his fascinating guests who traveled from around the world to Cuba to have a specialty beverage crafted just for them. One of Ribalaigua’s more famous guests was American author, Ernest Hemingway.

According to an interview with Hemingway’s niece Hilary Hemingway, he went in to use the restroom at El Floridita and overheard patrons at the bar talking about how wonderful the daiquiris were. Legend has it that Hemingway was a diabetic, so he ordered a variation of Ribalaigua's daiquiri that substituted grapefruit juice for sugar and included double the amount of rum. The Hemingway Daiquiri (also known as the Papa Doble) was born. 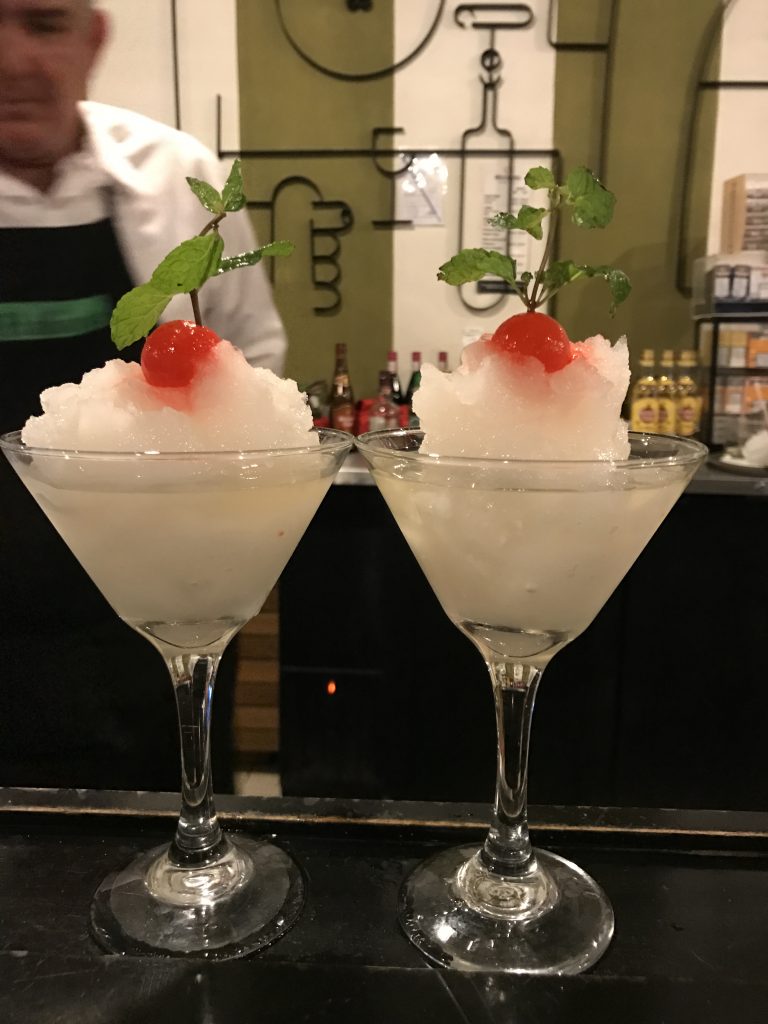 To this day, a large group of American bartenders makes a yearly pilgrimage to Ribalaigua’s grave to celebrate the “Cocktail King of Cuba.”

By the 1940s, rationing on grain alcohol during wartime made whiskey and vodka harder to obtain in the U.S. The daiquiri grew in popularity thanks to rum being easily obtained in trade between the United States and the Caribbean.

As the taste of a refreshing daiquiri became more prevalent amidst restaurants, hotels, and resorts, the daiquiri started to take on new variations. By the 1950s, the earliest known mention of a frozen strawberry daiquiri was published in an electric blender recipe book. To this day, the daiquiri retains its spot as one of the most popular cocktail drinks.

Craving a daiquiri now? Give the Hemingway Daiquiri recipe a try and enjoy the sweetness of maraschino along with tart grapefruit in the classic rum-lime mix. Hemingway preferred his daiquiri was served without sugar (simple syrup), but most people prefer the added sweetness. If you prefer a frozen variation, try this Frozen Strawberry Daiquiri recipe.

For more information on bar and beverage items to craft this refreshing cocktail this summer, please contact the industry experts at Perlick.

CHECK OUT EVERYTHING WE HAVE TO OFFER IN THE LATEST VERSION OF OUR BAR AND BEVERAGE GUIDE TO LEARN MORE.