100 Years of Advertising in the Beer Industry

As the entire country gathers around the television on Super Bowl Sunday, we’ll all have our rooting interests. Some will be pulling for their favorite team and others will be rooting for the host to announce, “The wings are ready!” However, a good number of us will have far more interest in the commercials than the football game itself. Ask someone about their favorite play in the Big Game or their favorite commercial and we bet they’ll recite the advertisement first!

Super Bowl commercials have become a cultural phenomenon. A 30-second spot in this year's Super Bowl can run you $5 million. That could buy you more than a few pints. And guess what product continually makes waves with their advertisements year after year? That’s right, beer. And it's been that way for years.

The History of Beer Advertisements

Advertising is a science. Advertisers use all sorts of methods to grab your attention, whether it’s through comedy, pulling at your heartstrings, or getting a jingle or catchphrase stuck in your head. Some of the best advertising is found in beer commercials and print ads. Advertising Age’s Top 100 Ad Campaigns of the 20th Century featured a handful of ads from the beer industry, so it’s no surprise beer can advertise just as well as it tastes.

From “Wassup” to “The Most Interesting Man in the World,” beer advertising has taken a life of its own since the inception of the television. Beer ads were not always easy to find. In fact, it took quite a while for ads to appear on TV, especially after the industry recovered following the Prohibition era. For a long time, print advertising and word of mouth were the best ways to sell a beer.

One company who has been a mainstay since the 1700s and still produces critically acclaimed advertisements is Guinness. 100 years of advertising in the beer industry can’t be explained without including the real inventors of beer advertisements. Guinness created some of the best known, witty, and entertaining advertising campaigns in history. In the 1930s, Guinness began making headway with its ingenious print ads. An art director by the name of John Gilroy began illustrating ads and would continue doing so for nearly 30 years. 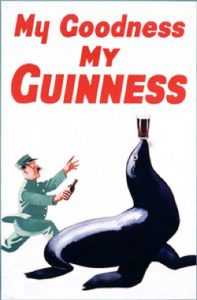 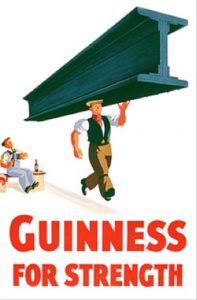 It wasn’t until the late 1940s that television and beer would finally forge a relationship that would continue to this very day. Around the same time, another partnership that is stronger than ever would also form – beer and sports. Beer companies’ initial form of advertising on television was through sponsoring sports telecasts or other TV programs. In 1947, Hyde Park brewery in St. Louis became the first brewery to sponsor a televised program. From there, the floodgates opened up and local breweries around the country seized the opportunity to sponsor different television broadcasts.

Beer commercials really took off in the early 1950s. Carling Black Label Beer introduced a TV spot that would set the company apart with its catchy jingle and a charming recurring character, Mabel.

“Hey Mabel – Black Label” was a staple for Carling for years to come. In the 50s and 60s, animated commercials, even for beer, were not only cheaper to make but allowed for a real dose of creativity. Take for instance, the Hamm’s Beer television spots. Not only did they feature an animated cartoon bear, but these commercials followed a story with vibrant imagery that kept the viewer watching the entire time.

The 1970s were a turning point for beer advertisements. Miller Brewing Company began rolling out TV spots that focused on the consumer needing a beer because they earned it. Others followed suit. Soon beer commercials would take a different approach on television, especially when Miller launched Miller Lite.

Light beers were a tough sell for the male demographic, but by introducing athletes and so-called “tough guys” in commercials to tell them to drink it, it worked like a charm. Former New York Jet, Matt Snell appeared in the first Miller Lite commercial. John Madden, Rodney Dangerfield, Bob Uecker, and Mickey Mantle were some of the celebrities to appear and endorse the beer. The “Tastes Great, Less Filling” campaign that followed would dominate the airwaves for decades.

As the impact of beer ads grew, so did the investments made by beer companies into their commercials. This “Surfer” spot by Guinness was adored by critics and consumers alike, winning advertising’s most prestigious awards.

Over the last 40 years, the Super Bowl has been the ultimate showcase for advertising in the beer industry. Every major brand wants a piece of the action. From automobiles to websites to snack chips, there’s no shortage of variety on Super Bowl Sunday. But in terms of impact, it’s hard to argue that beer isn’t the king of Super Bowl commercials. Whether it’s a celebrity cameo, CGI effects, Clydesdale, or an adorable puppy, the beer industry has come a long way in 100 years. Even the most simple beer commercials still resonate:

While beer has been an advertising leader over the last 100 years, Perlick has been leading the way by developing revolutionary beer systems for a century. To see how your bar and beverage program can set itself up for the next 100 years, read the Perlick Bar & Beverage Product Guide.